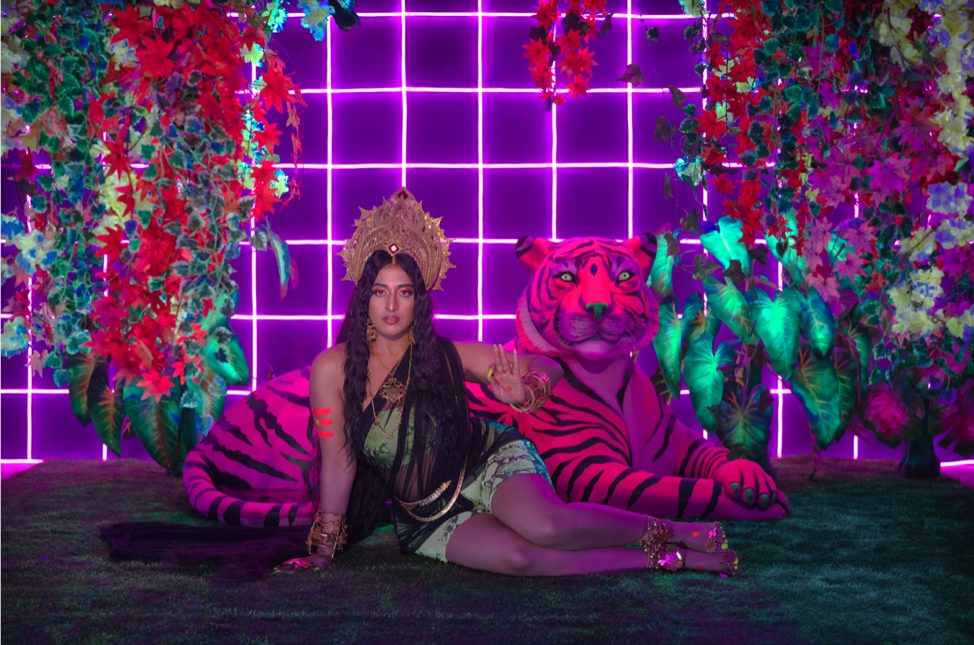 The colorful and empowering clip was created by an all-female team in collaboration with Kumari and Madhu . In speaking about the video, Kumari told The FADER :

“KARMA is a reminder that beautiful things come to life when strong women put their skills together. The video was done by an all-female team. It started as a collaboration between myself and Sam Madhu, which explores transitions from art to reality and remixes cultural elements from the past and the future. It is inspired by traditional Indian aesthetics and futuristic cyberpunk worlds.

Sam basically developed the idea of a neon universe in which I’m the central character, where traditional Indian elements like Rakshasa masks, goddesses and tigers are reborn with contemporary, neon aesthetics to create a universe where I appear as an array of compelling, powerful female characters. So you’ll see a latex matrix-inspired Rakshasi, a neon devi with her shocking pink tiger, a futuristic laser goddess. The video was so fun to make, and I feel like it represent a real female-empowerment moment.“

Above photo by Colston Julian

The song itself is produced by Sean Garrett and packs a passionate and powerful punch locked and loaded with robust rhymes and fierce delivery over a throwback beat with international resonances, which Idolator says finds the artist “coming into her own.”

Currently, Kumari is a judge on the MTV India show Hustle , mentoring the next generation of artists in a rap battle competition show. It was the highest rated premiere in the network’s history. After completing her own headlining North American tour, she recently performed alongside Wiz Khalifa  in  New Delhi  and was the first Indian artist to perform at the  F1 Festival  in  Singapore . Look out for more new music from the budding superstar, coming soon.