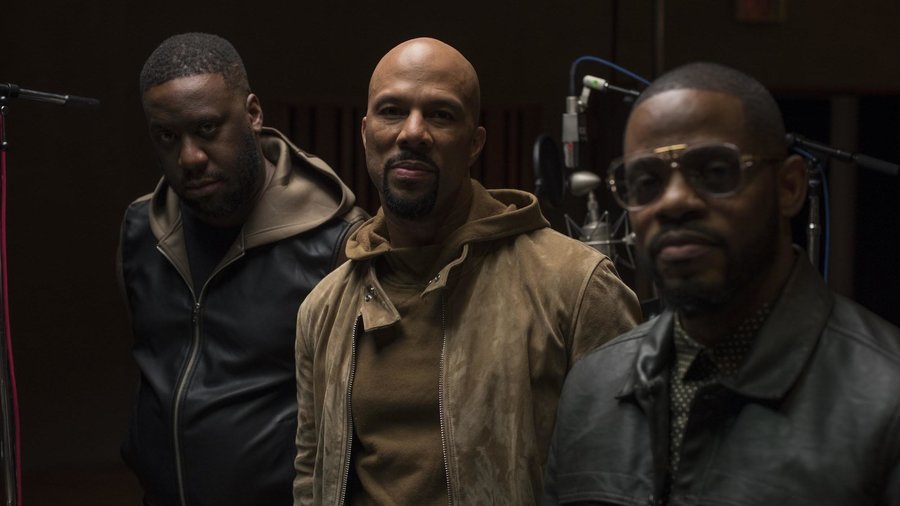 There are artist in the industry that as soon as you hear their name you know you are in for a great show yet when they do something new there is always the question of direction. Did they go left or stay right in the pocket of what you love. Well I have to tell you Common’s new band; August Greene did that and so much more!

The show started with Robert Glasper one third of August Greene introducing the band and welcoming the crowd to the show. Right from the first song you knew you were in for an experience because their first selection was from Radiohead. Robert stated people ask him why they play rock music and he went on to explain that black people invented it. From rock they took us to another one of our roots, jazz and killed it. Robert made his Rhodes sing lead while the bass and drums held the pocket. Each musician and instrument was communicating with each other without saying a word. Leaving us using one word… Amazing!

Kareem Riggins the drummer switched times within the song from 6/8 to ¾ to 4/4 with a precision only someone of his talent can exude. As the Rhodes sang occasional Thelonious chord progressions, your ears recognized, embraced and rejoiced the sweet melodic harmony only true musicians can resonate. A vibration so strong even haters had to show love.

Next we get a glimpse of Robert’s true personality and humor that was shown throughout the show as he claimed he was going to sing. The crowd stood patient as he attempted to emulate Ledisi. Only after 16 bars into the song and to the audience surprise the real songbird came on stage. In one song she showed us why we love her. She scatted; she hyped the crowd with a hip hop call and response and so much more making the song and our experience enjoyable. Affirming with each note your appreciation, beauty and the difference of live verses recorded music. Yes it was truly… Alright! Next, the crowd went wild as the band played a Jill Scott song but when she walked onto the stage the cameras went up, the conversations in the back of the house stopped and her voice pierced the speakers while entering your inner soul like only Jill Scott can do. As she finished her song the roar of the crowd’s applause deafened your ears.

At this point everyone felt like they got what they came for and was completely content yet when one of my favorite hip hop artist hit the stage you were reminded the difference between organic hip hop music that comes from the heart and fabricated music to make money. Lupe Fiasco came out and performed his classic skateboard anthem and Grammy award record;”Kick Push.” The euphoria was so intense it reinforced why as a music lover you love and celebrate Grammy Week especially in the most lit city in the world…NEW YORK! Yes, August Greene was musically flossing with a Floss Magazine swag because if you can’t floss why bother?

After someone shouted out something from the crowd wanting to be a wild card Robert got the audience attention back stating he had bars and played the keyboard once again letting it speak to us musically like only he can. His rapid chord progression and syncopation made you feel like you were on the train. He slowed the pace as if the train was arriving in the station musically creating an ambience that took you on Roberts’s journey making you appreciate his gifts and talents once again. Just as you began to get settled in the groove you were snapped back into the wonder of the night and the incredible show you were blessed to enjoy as Bilal stepped on the stage. Once again you were jamming!

At that point they took a five minute break and we all ordered our drinks and food to fuel up for whatever was next. Upon return Derek Hodge got on the bass and folks he showed up and showed out. The only thing to top that was the moment we were all waiting for… Common got on stage performing his 2005 classic; “Be.” Kareem Riggins on the drums brining the boom bap as the audience sang the words to the song Common paid tribute to J. Dilla. Yes! Aphrodisiac we be dat! He continued his tribute to hip hop by reminding us that no matter where you from hip hop started on the corner while spitting the lyrics as well.

Yes, yes, ya’ll, hip hop history happened at the Highline Ballroom. The only left was… NEW MUSIC…Clap, clap clap…Common spoke for a minute about the formation of the new band and went right into the first new song from the album; Black Kennedy. He explained that when you think of the Kennedy’s you think of American royalty so he said since we are royalty he is; “Black Kennedy.” Shamar rocked the chorus and Common spit consciousness while telling a story that massaged your mental and your musical soul.

Yes folks, as I listened I could only think about how much I am going to enjoy this album and the end of the song mimicked my thoughts melodically as they sang… It’s a beautiful ride. As I continued to enjoy the show I was like a hip hop addict enjoying her fix of conscious yrics and authentic music translated into the boom bap. As I looked at the crowd I realized I was not the only one mesmerized by August Greene and Common’s lyrical mental massage relaxing your inner soul letting you know just as the chorus sung… I need to let go. The next selection from the album was entitled; “Practice” Common explained that this song was dedicated to the journey of a performer and what it takes to be a professional. Once again, Commons voice pierced the speakers telling a story of a journey with a lesson in each phrase. A lyrical art not many can execute the mastery of lyrical elevation. The high from our l fix left us all in a state of musical euphoria. It takes a lot of practice to accomplish that!

As we continued to enjoy the musical state of mind August Greene put us in Robert broke the trance with a parody on his ability to (not) spit a rhyme so much so Lupe came on stage and snatched his mic. That one move showed us the love they have for the art while letting us know life isn’t that serious. They took the time to laugh and took us along with them. Just as the laughter was over they went into the next song. As they chanted hip hop and you don’t stop the show put those words in action as Marsha from Floetry came on stage singing, “Yes.” The queen didn’t sing she sang that song so much it sounded like the first time we heard it 17 years ago. Yet when Jean Baker continued the song after Marsha you came to the realization that when it comes to August Greene they are tapped to a talent pool that is unending.

Thinking the show was over people began to put their coats on only to them off when Dave Chappelle came on stage with a birthday cake. He spoke about how Common believed in him and said yes to be on his show when a lot of other artist said no. He affirmed that is when the friendship began and it’s still going. Then in Dave Chappelle‘s funny way he asked everyone to sing Common’s manager Happy Birthday… the white version (His words.)

It’s night like these that I am so thankful to have a job like mine. It awards you opportunities to experience life in a way that compares to none. This show was and will always be rated by me as classic! Thank you Paris and Floss Magazine! I had an amazing birthday! It’s all in a day with Ameliaismore.