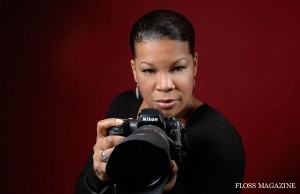 Rowena Husbands is one of the most sought after celebrity photographers in the business. She has a celebrity clientele that boasts a black book of names only a star-struck fan would dream of having. Her work has adorned the pages of the Dolce & Gabana Music Book, Def Jam Recordings 25 Anniversary Book, News Day, The New York Beacon, Vibe, The Source, Ebony, Jet,  Billboard,  Rolling Stone, Essence and People Magazines.

As the founder of Blinkofaneyephotographyonline.com her lens is her work of art capturing some of today’s most influential figures in the world of entertainment such as, Aretha Franklin, Chaka Khan, Busta Rhymes, Missy Elliott, Wendy Williams, Alicia Keys, Jazmine Sullivan and many more.

Husbands spoke to the Von Boozier Twins about her career in photography and upcoming business endeavors.

What artist do you idolize?

RH: Well first and foremost I don’t idolize any artist, there are several artist whom I admire because of their work ethic and talent such as Missy Elliott, Alisha Keys, Chaka Khan, Beyoncé and Aretha Franklin to name a few.  These women have stood the test of time with their music and have gone through some type of adversity and came out on top and after years in the industry are still relevant.

How did your passion for photography arise?

RH: In the beginning it wasn’t a passion I just wanted to photograph my daughter Tralynn when she was little, it became a passion once a friend of mine Robin Dunn saw some of my photos and told me that I had a great eye and I should charge for my services. I would have to say that I owe all of this to the both of them. First to my daughter because had I not wanted to take pictures of her I would have never borrowed camera equipment from Canon USA and then to Robin who convinced me to start charging and to date I have been able to make a very good living and being well sought after photographer.

What was the best photo you ever took?

RH: I can’t really say that there is one best photo as you know I’ve been taking photographs for over 20 years and there are so many photos I’ve taken that are beautiful and that I love so it would be very hard for me to pick just one. What I will say is that if I had to choose it would be the photo I took of a young dancer the way I shot the photo it looks like she is levitating in the shot.

RH: My dream photo shoot would be to photograph the first lady Michelle Obama and Oprah together just being themselves.

Where do you find the majority of your inspiration?

RH: My first inspiration was my daughter and now I find my inspiration in people, their energy, gestures, smiles and the way they move I love watching people. Whether I’m shooting an event or in the studio I incorporate it allowing the subject to be free and fluid with their movement so I can capture the true essence of the person or event.

What has been your most memorable moment in your career so far?

RH: One memorable moment in my career was when I was hired to shoot the Queen of Soul Aretha Franklin it was a surreal moment after growing up listening to her music and seeing her on TV I would have never imagined in a million years that I would be a celebrity photographer let alone get a phone call from her publicist Gwendolyn Quinn hiring me to photograph her.  Another memorable moment would be being the official photographer for American Idol Live tour I actually cried while I was taking the photos because I couldn’t believe that a girl growing up in Harlem in the projects being raised by a single mother with my 4 older brothers who wanted to be a teacher who fell into photography and 20 years later here I am it was mind-blowing and very overwhelming.

What is your favorite post-production tip?

RH: Make sure you have a good editing program.

Who is your all-time favorite celebrity to work with?

RH: I would have to say Missy Elliott as her personal photographer she is funny animated and a true professional. I also get to travel with her photographing behind the scenes, during performances as well as capturing her private personal moments.

Can you give our readers some advise on how they can improve their skills on taking photos?

RH: Don’t be afraid to take risk while shooting, learn the camera and its functions check out photography tutorials on the internet then just shoot any and everything use your family and friends as your subjects until you find your niche and follow your dreams.