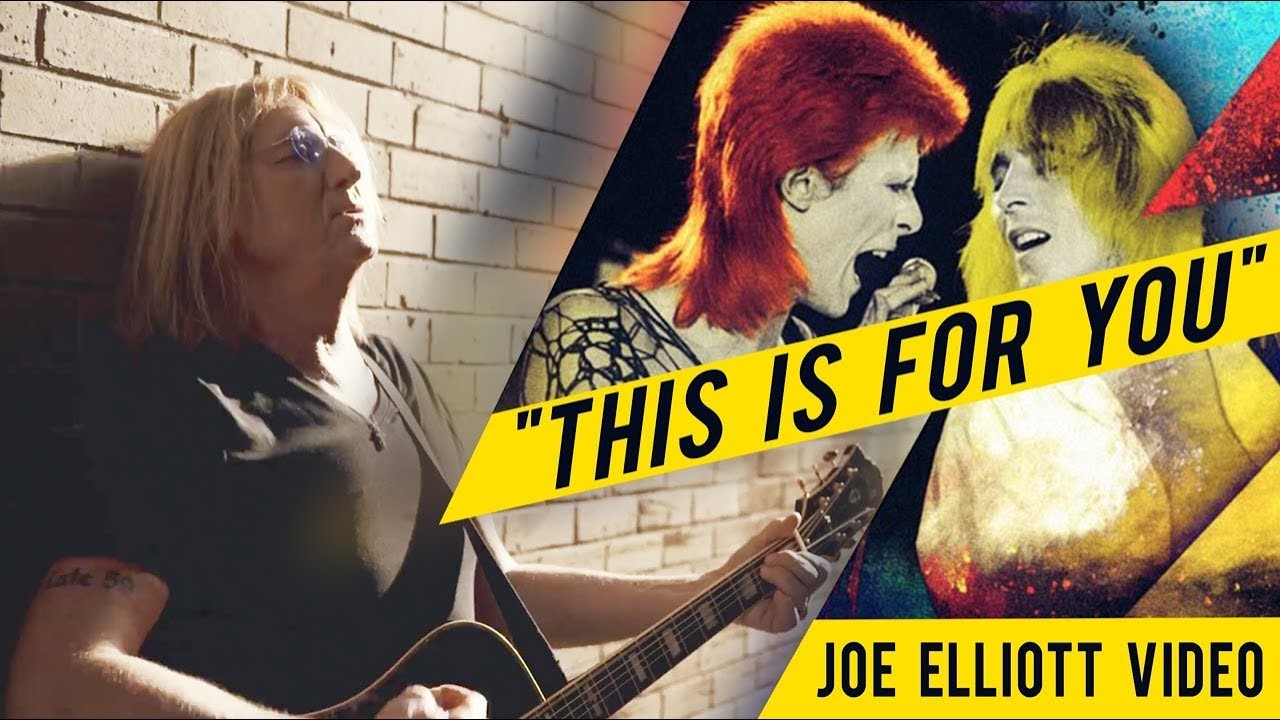 Def Leppard frontman Joe Elliott has released a touching video tribute to his friend and early guitar hero, the late, great legendary musician Mick Ronson. Filmed in the midst of his band’s recent sold out North American stadium tour, the video opens with a film projector projecting cinematic footage of Elliott performing Ronson’s ballad “This Is For You” on acoustic guitar in various locations on the road as archival photos and vintage black and white footage shows Ronson performing solo and with long time musical partner David Bowie. As Elliott sings the lyrics, “This is for you! How are you doing? It’s been a while/Where have you been? What have you seen? And did you smile?/Like I’m Supposed to do/Like I remember you,” the song takes on new meaning as the love letter to a long-lost lover turns into a musical conversation between two old friends. “I had an opportunity on a day off on tour to shoot a video…it just seemed rude not to!, “ says Elliott. “This video is my gift to the memory of Mick Ronson who gave me so much in my youth and then later on when we got to know each other.”

Watch “This Is For You” below.

The video was unveiled this past Saturday, August 25 on the 46th anniversary (8/25/72) of the filming of David Bowie and the Spiders from Mars’ shadowy and subversive video for “John, I’m Only Dancing.” Directed by iconic rock photographer Mick Rock, the video featuring Bowie and the band in their best glam attire and androgynous dancers, was banned by “Top of the Pops” in the UK and was never released in America as it was deemed too risqué by the record label.

Elliott recorded “This Is For You” exclusively for the soundtrack for the documentary Beside Bowie: The Mick Ronson Story, which was released in June via UMe following last year’s successful theatrical run and the DVD/Blu-ray releases. The acoustic guitar and piano ballad, penned by Laurie Heath of the New Seekers, was included on Ronson’s 1975 album Play Don’t Worry. Elliott’s rendition is especially poignant as it features the late Dick Decent’s last-ever performance on the piano. Decent was a frequent Def Leppard collaborator and played with Elliott in Cybernauts, their Bowie cover band, formed as a tribute to Ronson.