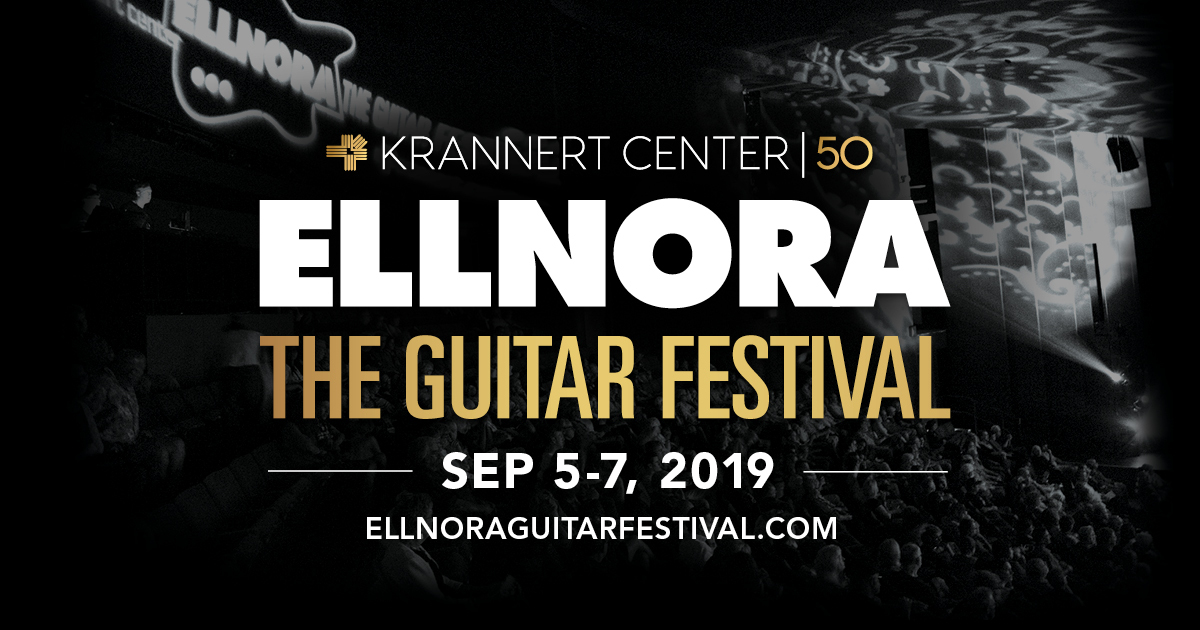 On September 5, 6, and 7, 2019, a diverse and exciting curation of the world’s most remarkable guitarists will gather for the eighth installment of ELLNORA | The Guitar Festival, presented by Krannert Center for the Performing Arts at the University of Illinois at Urbana-Champaign. The 2019 event features artists from across the globe, including those from Brazil, Venezuela, Colombia, Madagascar, Niger, Korea, Gambia, France, Bosnia, China, Germany, and throughout the United States, representing a broad spectrum of musical genres, instrumental traditions, and playing styles. The internationally recognized, biennial event not only features performances from an array of the world’s most influential guitarists but also engaging, FREE educational programming, including lectures, workshops, and panel discussions for patrons to enjoy.

The interactive programming at ELLNORA | The Guitar Festival begins on Friday, September 6 with a live broadcast of Illinois Public Media’s The 21st—a public radio talk show that celebrates news, culture, and the stories that matter to Illinois. The host will welcome to-be-announcedELLNORA guests for this new festival feature. The public taping begins at 11am in Krannert Center’s Studio Theatre.

ELLNORA welcomes Fabi Reyna—founder of  She Shreds magazine, the only print publication in the world dedicated to women guitarists and bassists—as she hosts Guitar as a Creative, Political, and Emotional Tool on Friday, September 6 at 1:30pm . In this lively panel discussion, Fabi will lead a panel conversation about gender and genre in the music industry. Reyna’s bandSávila, a cumbia/Latin/world/R&B-inspired ensemble, will perform a free public show on Saturday, September 7 at 1:30pm at Stage 5.

On Friday at 2:45pm in the Studio Theatre, guitarist Steve Dawson hosts a live taping of his podcast, Music Makers and Soul Shakers with Steve Dawson . Dawson’s podcast features thoughtful and in-depth interviews with artists, musicians, producers, and engineers. His guest will be fellow ELLNORA artist Molly Tuttle.

Saturday, September 7 opens with Yoga with GLOW by Lola at 9am in the Orchestra Rehearsal Room. Attendees are invited to start their day with a refreshing yoga session led by Lola Pettinger, with live musical accompaniment from Grammy Award-winning slack key guitar playerJeff Peterson.

Rachel Rosenkrantz returns to host a free workshop at 11am on Saturday morning, entitled,Anatomy of Sound, where patrons can get hands-on with the detailed craft of guitar making.

Two rounds of Sonic Meditations on Saturday, September 7 invite guests to participate in sonic rejuvenation through the wisdom of Reverend Florence Caplow paired with a short acoustic music set. At 5pm, acclaimed classical guitarist Bokyung Byun will provide the musical portion of the Sonic Meditation, with Guido Sanchez-Portuguez offering his classical guitar skills at the 8pm session. Both Sonic Meditation events will take place on the Colwell Playhouse stage with no late seating.

The full schedule of ELLNORA events and performances can be found below and at EllnoraGuitarFestival.com.