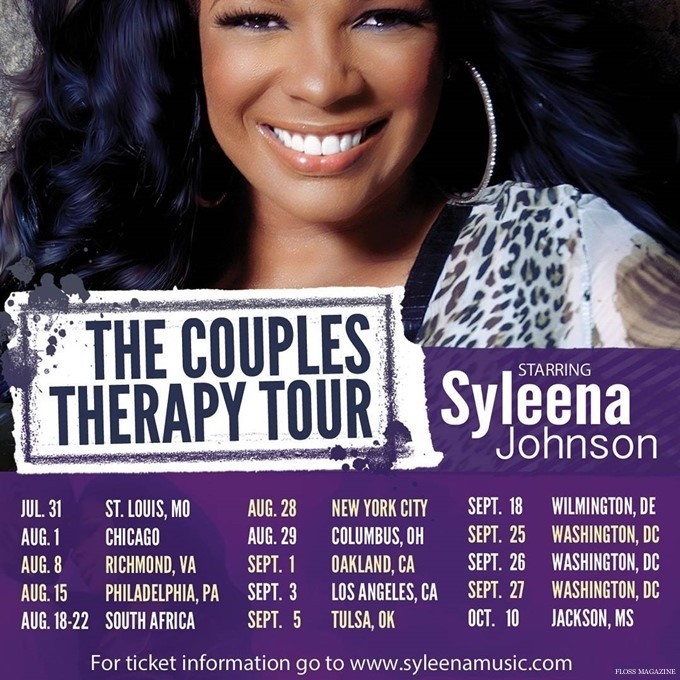 Grammy nominated vocalist and writer Syleena Johnson is one of the greatest singers and performers of her generation. She has scored major R&B hits and been invited to collaborate with the likes of Kanye West, R. Kelly and Musiq Soulchild. Having fought the major label system to allow her true identity to shine forth, Syleena now steps forward with her most anticipated album to date Chapter 6: Couples Therapy, which was released on the Blackbyrd label. With production from Ric Atari, Kajun and Pierre #TheMaven Medor, Couples Therapy is the sixth chapter in her collection of blues and soul-inspired concept albums. (The album hit #15 on the Billboard R&B Chart.)

This powerful new recording takes us back to the Chicago natives roots and caters to a more traditional R&B style. Couples Therapy deals with love and relationships. As with all of her projects Syleena gives us a heartfelt glimpse into where she is within her own journey and her private life. This project embodies Syleena’s relentless passion for songwriting.

Johnson, wrote / co-wrote all of the tracks. The album opens with the upbeat and lyrically honest song “All This Way For Love.” Leela James accompanies Syleena on the soulful 60’s throwback “Fool’s Gold”; and the incomparable Dave Hollister joins her on the moving and triumphant “Harmony.” The albums production remains diverse and yet doesn’t venture too far off track. Vocally critics agree that this is one of Syleena’s strongest overall projects in years. It has been dubbed, “The best R&B album of her career.”

The first single and video is for the song “Perfectly Worthless” a masterpiece about the anguish that one endures at the end of a tumultuous affair. Syleena croons, “Since you said we’re through. I’ll play the fool. Broke all the rules while loving you.” a sentiment that all of us can relate to at one point or another in our love lives.

Chapter 6: Couples Therapy has been made into a film that stars Johnson, directed by Tangie Black Moore of Tier2Films and the other collaborators from the album. Syleena’s passion for health, fitness, and nutrition has also led her to develop a fitness DVD called Mommy’s Got Soul. She will also be releasing her new book The Weight Is Over. Syleena is also a member of Zeta Phi Beta Sorority, INC and plans to work on many charitable projects throughout the year.

Syleena is hitting stages in the United States and beyond all year long. She will be co-headlining dates in support of Chapter 6: Couples Therapy with Dave Hollister and will be appearing with Faith Evans in the UK. Syleena who is the daughter of legendary blues and soul singer Syl Johnson will also appear on the Daughters of Soul tour. Here the Daughters of Soul honor their unforgettable parents Nina Simone, Donny Hathaway, Bill Withers, Chaka Khan, Syl Johnson and other soul pioneers. A superstar that has always shined brightly, Syleena Johnson is poised to conquer the entertainment industry and the world.