Jim Carrey gave the commencement address to Maharishi University of Management’s class of 2014. The University Board of Trustees also presented Mr. Carrey with the honorary degree of Doctor of Fine Arts Honoris Causa, in recognition of his significant lifetime achievements as a world-renowned comedian and actor, artist, author and philanthropist. Jim brought his biggest pieces of creation in front of the audience, and revealed his artwork later during the speech. 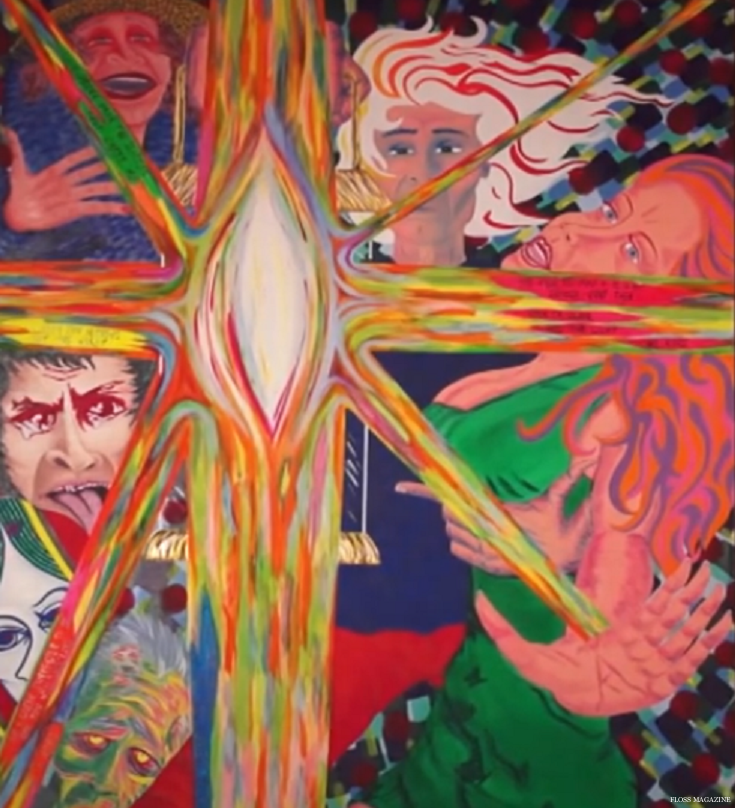 His said he was here to plant a seed today, seed that will inspire you to move forward in life with enthusiastic hearts and a clear sense of wholeness the question is will that seed have a chance to take root or will I be sued by Monsanto

I left the crowd with a lot of laughter but hope he said But I didn’t freak out you know. I use that time to eat a large meal, connect with someone special on Tinder.

Because life doesn’t happen to you, it happens for you. How do I know this? I don’t but I’m making sound and that’s the important thing. That’s what I’m here to do. Sometimes I think that’s the only thing that’s important really. You know, it’s just letting each other know we’re here, reminding each other that we’re part of a larger self. I used to think Jim Carrey is all that I was. Just a flickering light. A dancing shadow. The great nothing masquerading as something you can name.

Seeking shelter in caves and fox holes. Dugout hastily.An archer searching for his target in the mirror. Wounded only by my own arrows.
Begging to be enslaved. Pleading for my chains Blinded by longing And tripping over paradise.
CAN I GET AN AMEN? amen

You didn’t think I could be serious did ya?
I don’t think you understand who you’re dealing with.
I have no limits.
I cannot be contained because I’m the container.
You can’t contain the container man!
You can’t contain the container. I used to believe that who I was ended at the edge my skin. That I had been given this little vehicle called a body from which you experience creation. Though I couldn’t have asked for a sportier model. It was after all a loaner and would have to be returned then I learned that everything outside the vehicle was part of me too. And now I drive a convertible.
I am elated and truly, truly, truly excited to be present and fully connected to you at this important moment in your journey I hope you are ready to open the roof and take it all in.
He gave his Special Thanks to thank the Trustees, the Administrators, the Faculty of M.U.M.
6:32for creating an institution worthy of Maharishi’s ideals of education. A place that teaches knowledge and experience. The knowledge and experience necessary to be productive in life as well as enabling the students through Transcendental Meditation, and ancient Vedic knowledge, to slack off twice a day for an hour and a half.

Then again he left the audience with laughter and more sense humor:

But when I look at this group here, you know, I feel really safe. I do. I’m just gonna say it: My room is not locked. My room is not locked.
No doubt some of you will turn out to be crooks.But white collar stuff you know, Wall Street that type of thing, you know. Crimes committed by people with self-esteem. Stuff parents can still be proud of in a weird way.

Then concluded his finally speech:

You could spend your whole life imagining ghosts, worrying about the pathway to the future but all there will ever be is what’s happening here in the decisions we make in this moment which are based in either love or fear.

Once that button is functioning in your life there’s no story that the mind can create that will be as compelling. Imagination is always manufacturing scenarios both good and bad and the ego tries to keep you trapped in the multi-plex of the mind. 2Our eyes are not viewers, they’re also projectors that are running a second story over the picture that we see in front of us all the time. Fear is writing that script and the working title is I’ll never be enough.”
Are you going to look at a person like me and say: how could we ever hope to reach those kinda heights Jim?
How can we make a painting that’s too big for our home?
How do you fly so high without a special breathing apparatus?

This is the voice OF THE EGO and if you listen to it there will always be someone who is doing better than you.
No matter what you gain, ego will not let you rest. It will tell you that you cannot stop until you’ve left an indelible mark on the earth
until you’ve achieved immortality. How tricky is this ego that it would tempt us with the promise of something we already possess.

Relax and dream up a good life I had a substitute teacher from Ireland in the second grade that told my class during morning prayer that when she wants something, anything at all, she prays for it and promises something in return and she always gets what she wants. I’m sitting in the back of the classroom, you know, thinking, well, my family can’t afford a bike, you know. So, I went home and I prayed for it and I promised I will recite the Rosary every night in exchange. Broke it. Broke that promise. But two weeks later I got home from school to find a brand new mustang bike with a banana seat and Easy Rider handlebars. Yeah.

#Jim Carrey on choices
Your job is not to figure out how it’s gonna happen for you but to open the door in your head and when the door opens in real life just walk through it.

And don’t worry if you miss your cue because there’s always doors opening. They keep opening and when I say life doesn’t happen to you it happens for you, I really don’t know if that’s true. I am just making a conscious choice to perceive challenges as something beneficial so that I can deal with them in the most productive way. You’ll come up with your own style. That’s part of the fun. Oh and why not take a chance on faith as well?
Take a chance on faith, not religion, but faith, not hope but faith. I don’t believe in hope. Hope is a beggar. Hope walks through the fire and faith leaps over it.
You are ready and able to do beautiful things in this world and after you walk through those doors today
you will only ever have two choices:
Love or Fear.
Choose love and don’t ever let fear turn you against your playful heart.