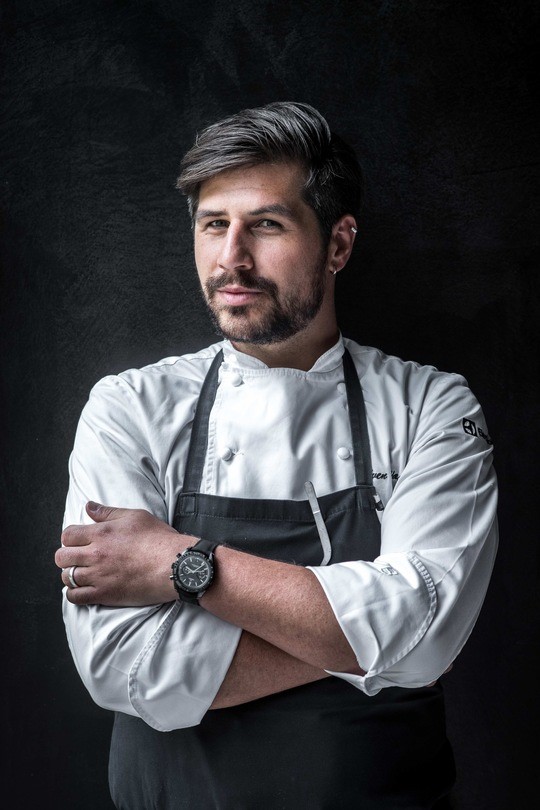 Telling stories, reviving old memories and creating new ones, that is his credo: Sven Wassmer (2 stars in the Michelin Guide and 18 GaultMillau points) is the perfect fit for Grand Hotel Quellenhof and is launching a new gastro concept there in July 2019. Together with his wife Amanda Bulgin, who will be the sommelière overseeing the wine offering at Quellenhof, the top chef will be in situ in Grand Resort Bad Ragaz, Switzerland from January 2019 to set everything up and ensure it runs smoothly.

In the past few months the Wellbeing & Medical Health Resort announced a complete renovation of Grand Hotel Quellenhof to celebrate its 150th anniversary in 2019 – and there are plenty more projects in connection with that. So now there will be a Lifestyle Restaurant concept in July 2019 led by Sven Wassmer, who at 31 already has 2 Michelin stars and 18 GaultMillau points under his belt.

«More and more people are travelling for exceptional gourmet experiences. We have found an extremely talented young chef in Sven Wassmer, whose style perfectly complements our own product, and he has ambitions to push on with us to rank among Europe’s best,» enthuses Hotel Director Marco R. Zanolari about the newcomer. Alongside IGNIV by Andreas Caminada this extension of gastronomy at Grand Resort Bad Ragaz should make it a real culinary destination. The concept planned with the young man from the Frick Valley will initially replace the former restaurant Bel Air and will be made up of two parts: so in the current ‘Red Bel Air’ there will be a health conscious lifestyle restaurant which opens each day. The dishes offered here will be conceived by a collaboration between a nutritionist and the head chef led by Sven Wassmer. The current ‘Blue Bel Air’ will become the signature restaurant of the 2 Michelin starred chef Sven Wassmer, who will in future be here to greet guests in the informal atmosphere on five evenings per week– with an open show kitchen and spectacular wine cellar.

The native Wassmer is always focussed on the goal of pleasing connoisseurs and experts alike. He achieves this in an inimitable way by passionately combining regional edible treasures with the best ingredients from around the world. «I can hardly wait to stamp my identity on the future of this resort rich in tradition. Grand Resort Bad Ragaz is beautifully located, surrounded by nature and the mountains and my producers and top vintners are in close proximity, » says the happy, team-oriented chef about his new role.

Renato Wüst, Executive Chef at Grand Resort Bad Ragaz, who celebrated his 40th year of service on 01 July 2018, will continue to run the culinary side of banqueting and room service as well as the restaurants NAMUN, Zollstube, Olives d’Or and Hotel Schloss Wartenstein.

About Sven Wassmer:
After years of travelling and training in renowned restaurants, among these Schloss Schauenstein in Fürstenau, worked as Head Chef in Restaurant 7132 Silver in Hotel 7132 in Vals from December 2014 to May 2018. In 2016, GaultMillau named him the discovery of the year with 17 points. This number of points had never before been given on the first occasion. In the same year he gained his first Michelin star, and one year later his second. In 2017, he was honoured for his work with the title of «Success of the Year» and 18 points by GaultMillau.

About Amanda Wassmer Bulgin:
As Wine Director Amanda Wassmer Bulgin will look after all the wines at Quellenhof. Bulgin, who was born in England, will skilfully compliment her husband Sven Wassmer’s cuisine as Sommelière, showcasing her knowledge and high level of expertise in hospitality. She is a wine graduate and feels it is important to treat all guests openly and to impart her knowledge of wine in a way that arouses their curiosity. She herself exudes a thirst for knowledge, clearly proven by her additional qualification of a Master of Wine.

About Grand Resort Bad Ragaz:
Europe’s leading wellbeing & medical health resort comprises both five star hotels Grand Hotel Quellenhof & Spa Suites and Grand Hotel Hof Ragaz, as well as Palais Bad Ragaz. The rooms and suites, from historical and splendid to ultra-modern and purist, offer guests a stylish setting for their stay in Bad Ragaz. Seven restaurants with a total of 59 GaultMillau points and 1 Michelin Star, a bistro, café and Sushi-Take-Away all cater for culinary delights. Two golf courses, the Kursaal Business & Events Centre, a variety of cultural activities and a casino all complement the whole experience. Hotel Schloss Wartenstein also became a part of Grand Resort Bad Ragaz in 2016. The «Blue Gold» of Bad Ragaz, discovered in the nearby Tamina Gorge in 1242, offers guests a unique and authentic spa experience in the Thermal Spa and in the public thermal baths Tamina Therme. This is enhanced by the internationally renowned Medical Centre’s supporting medicinal achievements, including the Swiss Olympic Medical Centre. In 2014 the in-patient Rehabilitation Clinic was introduced, in addition to the existing Outpatients.