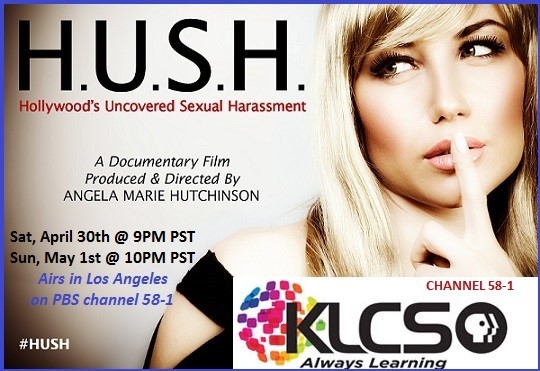 PBS acquires the feature documentary H.U.S.H. to air on KLCS in Los Angeles during National Sexual Assault Month. H.U.S.H. will debut on April 30th at 9:00 PM PST and again on May 1st at 10:00 PM PST. H.U.S.H. is about Hollywood’s Uncovered Sexual Harassment. The confessional style documentary is produced and directed by Angela Marie Hutchinson of B.i.H. Entertainment.

“As an African American woman working in Hollywood for over 10 years, I have experienced several jaw-dropping situations and received numerous immoral propositions,” says Hutchinson. “H.U.S.H. will transform the perception of how women in Hollywood view their worth. I also hope it gives women the courage to be bold and fearless while pursuing their entertainment careers.”

The film takes viewers through a riveting journey of intimate stories delivered by an all-female cast of diverse backgrounds. With a mass appeal approach, the documentary explores a trending news topic in today’s sex-crazed society. “One in four women in the United States experience sexual harassment, while one in five reported being sexually assaulted,” according to Dr. Nola Veazie, a University of Phoenix Professor. She attended a private screening of the film and explains that “H.U.S.H. draws a parallel between not only the casting couch, but also barriers erected by sexual harassment in the workplace. The documentary H.U.S.H. is both a powerful testament to women’s resilience, and an appeal to leaders to recognize women’s worth in media,” says Dr. Veazie.

The sexual harassment incidents addressed in the film range from light moments to intensely appalling situations. “H.U.S.H. empowers women to be wise and to use their gut instincts,” says Associate Producer, Kausar Mohammed.

H.U.S.H. is a feature directorial debut for Hutchinson. In terms of future projects, she is developing a similar TV show, “Sex Unwanted,” inspired by the H.U.S.H. documentary. The unscripted series will be hosted by one of the H.U.S.H. women, Liz Crokin, a seasoned journalist and sex crime survivor.

According to Hutchinson, H.U.S.H. is not just a documentary but a movement. In a society where women are often objectified, sexual harassment is not only extremely prevalent but often overlooked, especially in the entertainment industry, says Assoc. Prod. Mohammed. Our documentary gives a voice to the many women who have been through such experiences, in attempts to garner greater attention to a contributing factor that hinders the success of women in the industry.