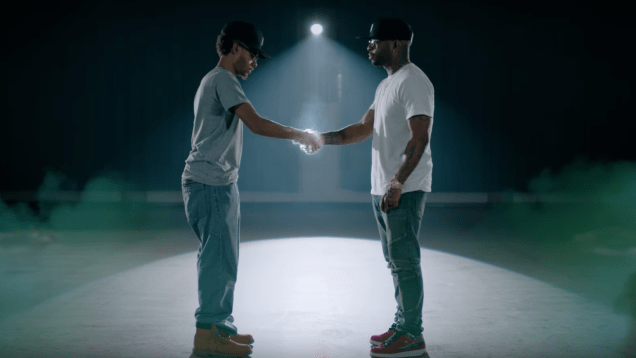 When I’m in the studio, I sometimes have these visions of conversations I’d like to have with my father. It leads me to think what it would be like if he and I could communicate on a higher level because there’s always been this barrier between us.

Not even just us—everybody in our family. In our house, we grew accustomed to this suppressed atmosphere of noncommunication. It was like the norm. Some catastrophic shit could happen at, like, 11 p.m., and by 11 a.m. the next day, everybody’s actin’ like it never happened. “Hey, what you havin’ for breakfast?” I guess that was our way of saying sorry or something.

I didn’t realize how much this lack of communication affected me as a man until I started going to therapy. Ironically, I would never have thought of going to therapy before I decided to get sober, which largely is something I knew I had to do in order to be a better father to my own son, Royce. Even as an alcoholic, I always looked at myself as a family man. I always took pride in my family. It’s hard, as a father and husband, to give your family the attention they need when you’re putting alcohol in front of everything.

I dodged a bullet with Royce, mostly because he’s on autopilot and was always in his own world. When I asked him if he ever knew about my drinking, he said he knew I was drinking, but he didn’t look at it like it was a problem. He was caught up playing his video games, talking with his friends and making beats online, so a lot of stuff I did went right over his head.

While working on this last album, I recorded myself one night thinking through one of the internal conversations with my dad and realized that I had actually recorded that same conversation with my son a few years back. And up until that night, I wasn’t really sure what I was going to do with it.

When I recorded the conversation with Royce, it was very important to me that he felt comfortable asking me anything. And as you can hear on the [latest Royce da 5’9” album] Book of Ryan, he definitely didn’t go easy on me. It was also important to me that he look me in my eyes while talking. I’ve always felt that looking my children in their eyes is like facing my own decisions. And before you know it, in the blink of an eye, my son will be looking his own children—his decisions—in the eye, which are in turn shaped by some of mine.

I decided that I would compare the two: my vision of the conversation with my father, and the conversation with Royce. It’s funny—the two studio sessions synced right up. They were magical and meant to be; they led to the “Who Are You?” skit. I didn’t have to call an engineer or nothing. I just went with the organic recordings as they were: very real conversations and thoughts.

That connection between my relationship with my father and my relationship with my son is all over that skit. All over the album, really. For example, one of the toughest questions Royce asked me was, “Do you ever get afraid?” Like, what could possibly make me afraid? And I was inspired to answer that question on “Outside.”
As a father, a black father in particular, you find yourself keeping up that Superman bravado, to a degree, to keep your son’s respect. And coming from where I came from, there has to be a little bit of fear there, just in order for shit to go smooth and for kids to listen to what you say. You want them to take your advice and understand what you say as law. That’s where the bravado comes into play.

For me, I felt like my dad wasn’t afraid of anything. Shit, I used to be scared of going downstairs in the basement—the lights were always off down there, so we were afraid. You know, normal kid shit. My dad was never scared of the dark. As a child, that amazed me. There could be a damn dragonfly or something like that, and we’d be petrified. All we had to do was go get Dad and he would kill it with his hands!

So when Royce asked me if I was ever afraid, I wanted to change the narrative and felt it was important for him to know that I am human. Because of my programming, I had to dig down deep, understand for myself and then explain to him some of the things that I’m afraid of.

I am currently in therapy, but creating the Book of Ryan took therapy to another level, one I never expected. I never realized how much going through shit with my dad back in the day and some of my family situations affected who I am today and what I do now until this project was completed.

With Book of Ryan, I was finally able to put my suppressed feelings into perspective from an artistic standpoint. It wasn’t until I went back and listened to the completely mixed and mastered album that it really hit me. I just broke down and started crying and immediately internalized how much it took out of me financially, mentally and physically—I mean, I had lost weight … I put everything I had into this album. In the end I felt like a fighter who just went through a war and had to be carried out of the ring. One who still had his title belt, but now there’s blood on it. I needed rest. After that, I felt like a new man.

I’ve heard from other people that my dad had issues with the album. He hadn’t listened, so he was basically assuming the worst. I asked my mom to tell him to listen, just listen to it. Then we can talk. So, then, at least we’re talking about the truth. I think this was the first time in my life—I swear to you—that my dad has ever seemed afraid to face something.

But I needed him to listen to the album so that he would know that through it all, he is my hero. I appreciate the way he handled his addiction and the way he chose his family. No, he didn’t do everything perfect, but he broke a lot of negative cycles that happened generations before him, and now I strive to continue breaking that cycle. I pray that my son will be a better man than me and see me as I see my father: heroic.