Check out Timbaland this Sunday May 29th club TAO in Vegas

Let’s go Las Vegas, me and Tink SubPac have something special for you at TAO this Sunday, May 29th. 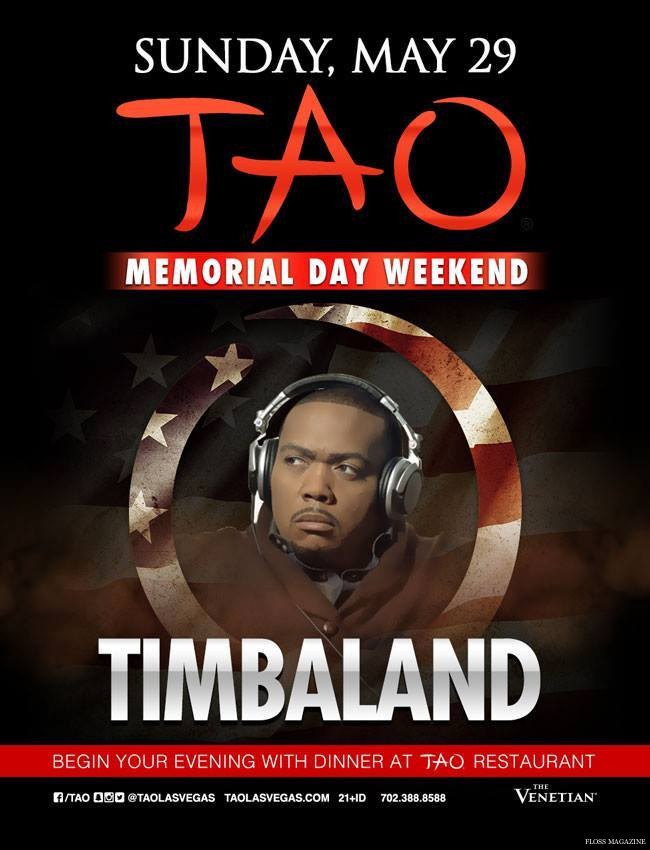 Carry Out is a song recorded by American rapper and producer Timbaland for his third studio album Shock Value II (2009). The song features guest vocals from longtime collaborator, American recording artist Justin Timberlake. Timbaland and Timberlake co-wrote the song with Timothy Attitude Clayton, Jim Beanz and Jerome J-Roc Harmon; with Harmon co-producing the song with Timbaland. Mosley Music Group, together with Blackgroundand Interscope Records, serviced the song to contemporary hit radio on December 1, 2009 in the United States, as the third single from Shock Value II.

Carry Out received a mixed response from contemporary music critics, with many being divided on the song’s composition and lyrical content. Carry Outs lyrics use the term ‘carry out’ as metaphor for sex. Most found the song to be one of the album’s best tracks, but criticized the use of food-sex metaphors and deemed the song to be lacking in creativity. The song also received comparisons to The Lonely Island‘s 2006 single Dick in a Box, in which Timberlake was featured. Carry Out peaked within the top ten of the charts in Canada, the Republic of Ireland and the United Kingdom. The song’s accompanying music video, directed by Bryan Barber, features Timbaland and Timberlake surrounded by women, which they attempt to seduce while dressed in fast-food restaurant themed costumes.

In the United States, the song debuted on the Billboard Hot 100 at number seventy five on December 19, 2009.[18] It rose to number eleven on the chart more than two months later on March 27, 2010.[19][20] The song also appeared on the Pop Songs and Radio Songs charts, where it peaked at number eight and number ten respectively.[19] The song spent twenty-six weeks on the Hot 100.[20]In Canada, the song debuted on the Canadian Hot 100 at number thirty-six, being the week’s second highest debut behind Jason Derülo‘s In My Head.[21] It fell to number seventy-six in the following week. The song eventually reached a peak of number seven and charted for three months more.[19][20]