About The Artists To Be Featured in Deconstruction: A Reordering of Life, Politics and Art in Miami – Details Here!

Eddie Arroyo (b. 1976) is known for his impressionistic techniques that document local and regional aesthetics. He explores the realities of how neighborhoods are impacted by gentrification. Essential factors contributing to his work include accelerated commerce and how it assesses value among different cultures within an urban community, and the relational tensions between real estate developers, artists, and local residents in Miami. Arroyo received a BFA from Florida International University in 2001. His work has been exhibited at Bridge Red Studios, Locust Projects, Girls’ Club Collection, Arthill Gallery of London, Art and Culture Center of Hollywood, Haitian Heritage Museum, Spinello Complex, the Bakehouse Art Complex, Swampspace, Magic City Innovation District, Edge Zones, Schmidt Center Gallery at Florida Atlantic University, Little Haiti Cultural Complex, and the CS Gallery.

Zachary Balber (b. 1984) was born and raised in Pittsburgh and moved to Miami at the age of thirteen, where he received his first camera. Years later, he was hired to assist the fashion photographer Bruce Weber. While assisting Weber in his campaigns for Abercrombie and Fitch, Vera Wang, and Vanity Fair Magazine, Zachary’s passion expanded toward the fine arts side of photography. Zachary’s work uses photography to penetrate boundaries between different socio-economic groups. Photography as he uses it, connects him to people and groups that he may never speak to; without the excuse of photography.” My camera becomes a private chamber to reorganize life, as I prefer to see it.” He attended New World School of the Arts, graduating Summa Cum Laude, majoring in creative photography. His work has been displayed in Art Basel, OCCA, MOCA NOAMI, Nerman Museum of Contemporary Art, Cisneros Fontanals Art Foundation, Locust Projects, Spinello Projects, Fredric Snitzer Gallery, The Armory, Art Hong Kong and Primary Projects

Frida Baranek (b. 1961) is a Brazilian sculptor renowned for her large sculptural works incorporating industrial materials such as plates, rods, and iron or steel wires along with fibers. Baranek creates organic forms and subjects using inorganic materials. Her works are known as commentaries about the environment and industrialization. She studied Architecture at Santa Ursula’s University and worked at Museu de Arte Moderna and Escola de Artes Visuais (both in Rio de Janeiro). Baranek received her master’s Degree in industrial design from Central Saint Martins in London in 2012. She has lived and worked in Rio de Janeiro, São Paulo, Paris, Berlin, New York and London and currently lives and works in Miami.

Christopher Carter (b. 1966) was raised in Boston, born in New Mexico. He earned his BFA from MICA (Maryland Institute College of Art), and studied bronze casting and foundry work in Cortona, Italy. He received his MFA in fine art/sculpture at the University of California at Berkeley. In 2002, Carter spent a summer in New Zealand studying the art of the Maori people. His own multi-ethnic background had earlier drawn him to African-American and Native American wood carving traditions. He uses found materials significantly in his sculptures, including glass, resins, recycled metals and wood, discarded and reclaimed objects.

The themes of resilience and struggle are projected in his works. A signature piece, Growth of a Nation has been acquired for exhibition by the Smithsonian’s The National Museum of African American History and Culture (NMAAHC).

Leyden Rodriguez-Casanova (b. 1973) is from Havana and is currently one of the directors of Dimensions Variable, an exhibition space located in Miami, where he also lives and works as an artist. He immigrated to the U.S. with his parents in 1980 during the Mariel boat lift. He attended the Ringling School of Art and Design and the New World School of the Arts where he was awarded the Frances Wolfson Endowed Visual Arts Scholarship, and has completed residencies at the Capri Palace in Capri, Italy and the Vermont Studio Center. In 2011 he attended the artist-in-residence Ville de Paris-Cultures France program at the Centre international d’accueil et d’échanges des Recollets in Paris.

Yanira Collado (b. 1975) is a mixed media artist from the Dominican Republic. After graduating from the New World School of Arts High School, she received a full scholarship to attend the Art Institute of Chicago for her undergraduate study. She is known as an interdisciplinary artist, working at the confluence of constructivism, textiles, and literary texts. Yanira has exhibited in Chicago, Pennsylvania, Berlin, New York and Miami. She has also studied early childhood development and art therapy specific to people with mixed abilities. Her experience with arts education as social engagement is central to her work, which includes extensive work with children and adults with mental and physical disabilities. Collado has been an artist in residence at the African Heritage Cultural Center and has exhibited in several galleries in Chicago, Pennsylvania, West Palm Beach and Miami. She was awarded first prize in the 2013 Miami biennial. She has also participated in the prestigious Project Row Houses as part of the summer visiting artist program that included a site-specific installation.

Gonzalo Fuenmayor (b. 1977) is a native of Barranquilla, Colombia. A master of sublime charcoal technique, he is laborious in his drawings as well as in his researching processes, resulting in large scale, monumental works. His mastery of charcoal drawing technique has reached the point where for the viewer it is almost impossible to differentiate black and white photographs from his work.

He creates stunning, surreal drawings that explore ethnic pride with a culturally and politically critical approach. Throughout his practice, he explores his position as an outsider in the U.S. and his cultural heritage. He received his Bachelor of Fine Art from School of Visual Arts, New York, and his master’s in fine art from School of the Museum of Fine Arts in Boston, from which he also earned the prestigious Traveling Fellowship. His solo and group exhibitions include: Museum of Fine Arts, Boston; Museum of Contemporary Art, Lima, Peru; Museum of Latin American Art, Long Beach; LMAK Gallery, New York; Galeria Mundo, Bogota; Dot Fiftyone Gallery, Miami; Dolby Chadwick Gallery, San Francisco; Queens Museum of Art, New York; Galería Mundo, Bogota, Colombia; Colombian Center Gallery, New York; The World Bank, Washington; The Naples Museum, Florida; and the Museum of Modern Art of Santo Domingo, among many others.

Pepe Mar (b. 1977) hails originally from Mexico and lives in Miami. He is known for his sculptural collages, featuring distinctively bright colors and his creative use of source materials from pop culture and ancient mythologies. His works have developed an immediately recognizable that comes across as sinister, whimsical and exuberant – with frenetic energy. The artist draws his inspiration from his passions for music, fashion, clubbing and shopping. He creates explosive, dazzling collages and mixed-media sculptures and installations that exploring the excesses of contemporary consumer culture. Much of the material for his work comes from thrift stores, packaging, and advertisements.

He received his BFA from the California College of Arts in San Francisco, and his MFA from Florida International University in Miami. Mar’s work has been exhibited nationally, including solo and group exhibitions at: David Castillo Gallery, Miami; Freight + Volume, New York; Hanna Gallery, Tokyo; Gavin Brown Enterprise, New York; Faena Forum, Miami Beach; New Arts Project, London; and the Nada Art Fair. His work is included in major collections in the U.S., Europe, and Latin America including public collections such as the ICA Miami and Perez Art Museum Miami.

Glexis Novoa (b. 1964) is originally from Cuba. He received a degree from the National School of Arts in Havana. He lives in Miami since 1995 and shares his time between his studios in Havana and Wynwood, Miami. Novoa also works on site specific wall drawings and ephemeral projects anywhere around the world. His work has been exhibited nationally and internationally.

Sandra Ramos (b. 1969) has become known for surrealist expressions about her relationship to her native Cuba’s social and political situation. As a young artist, she first began to study art at Havana’s Escuela Elemental de Artes Plasticas and then continued her studies at the prestigious San Alejandro Art Academy and the Superior Institute of Art in Havana (where she was taught by notable artists including Carlos Cardenas, Leandro Soto and Jose Bedia). In her works, she projects her personal experiences that derived from hardships in Cuba, including loss, grief and isolation. Ramos uses a variety of mediums, which including collage, etchings, painting, digital animation and installations. She is renowned for her engraving.

Jamilah Sabur (b. 1987) is an artist working across various disciplines including performance, video, and installation. She was born in Saint Andrew, Jamaica and received her MFA in Visual Arts from University of California San Diego, and her BFA from Maryland Institute College of Art in Interdisciplinary Sculpture. She is interested in embodied cognition, social mimicry, dissonance, ritual, and the uncanny.

Sabur was recently commissioned to create a performance at the Little Haiti Cultural Complex by Bas Fisher Invitational. Currently, she is an artist-in-residence at ArtCenter/ South Florida. Her work is currently included at the Perez Art Museum’s group exhibition The World’s Game: Fútbol and Contemporary Art and Scorched Earth at Current Projects. She has an upcoming solo exhibition at the Cornell Fine Arts Museum of Rollins College. 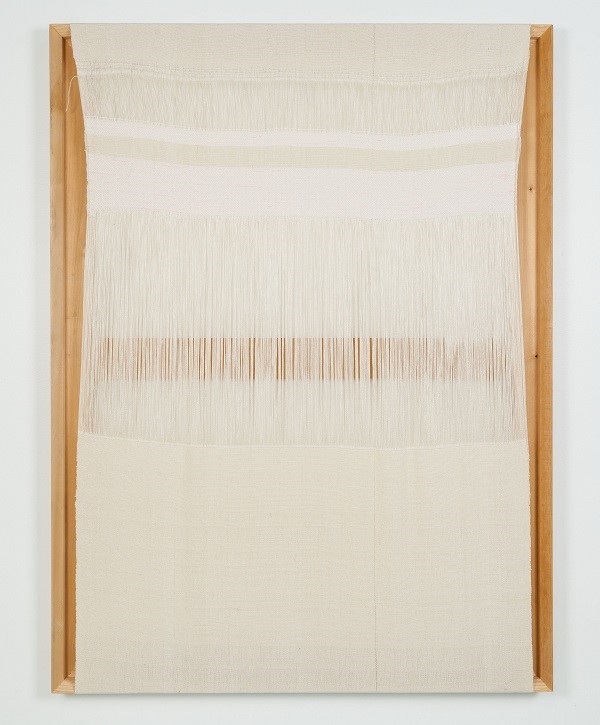 Frances Trombly (b. 1976) uses labor-intensive processes such as cross-stitching, embroidering, and weaving to produce dynamic yet understated two and three-dimensional works. In these painstakingly-crafted works, she references issues pertaining to feminism and domestic labor. Her work presents an opportunity to ruminate on materiality and craft tradition in a contemporary context. Trombly co-directs Dimensions Variable, an exhibition space in Miami.