Could 17 Year Old Lyrical Prodigy, Young Devyn Be The Princess Of Hip-Hop? 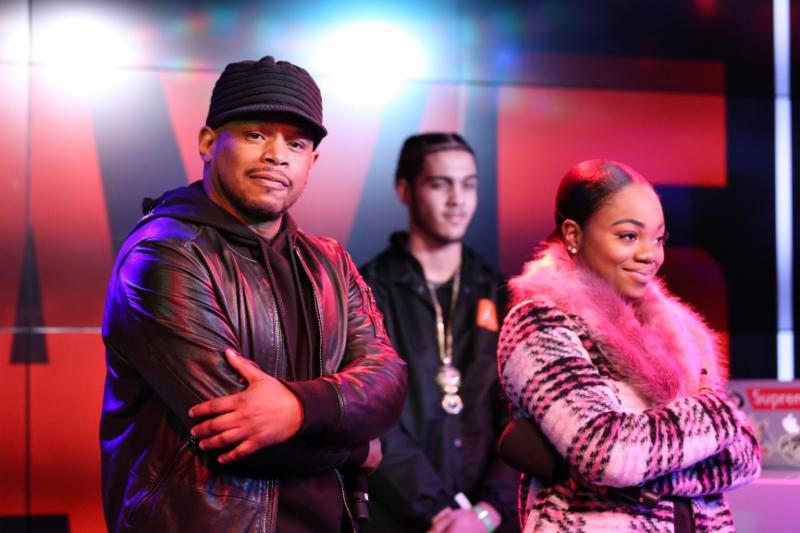 Brooklyn based 17-year-old Trini emcee Young Devyn, a senior in high-school has been hailed one of the most versatile artist with lyrics that can massacre any contender, male or female in a cypher! But on this day she smiles innocently at Sway reminding him that she may need a school excuse for missing class to rhyme in the “Dooms Day Cipher,” which airs on Sirius Satellite’s Sway In the Morning hosted and created by the legendary journalist and media personality, Sway Calloway.

The “Dooms Day Cypher” isn’t for the meek, it’s a celebration of hip-hop where rhyme slingers bring only their most vicious bars. It gets so intense that Sway has dubbed the MCs “Hyenas” because of the hunger you hear in their verses. “This ain’t about how many records you sold or how many views you have or who co-signed your career,” Sway says about the show, but Young Devyn is primed for all of that and more.

The industry is already taking notice! TheSource.com has called Young Devyn, “The Next Queen Of Hip-Hop?” Actress Taraji P. Henson (Fox TV’s “Empire”) took to Instagram posting in almost all caps, “This young lady @youngdevyn is here to stay!!!! THE GAME NEEDS HER!!! I NEED Y’all to know her name. She is gifted and Y’ALL NEED TO KNOW!!! No 16-YEAR-OLD spittin like this period!!!” At the time she’d posted Devyn was 16 and just bodied the 16s on “Friday Fire Cypher” which aired September 22nd. Sway, Heather B, Tracy G, and DJ Wonder host of Sirius XM’s Sway’s Universe were stunned! “Hip-hop is safe, the future is safe,” exclaimed Sway! So astounded by the lyrical heat, Young Devyn, was spitting, Taraji posted a second time and Devyn’s Instagram nearly tripled overnight. Of course, this led to rumors of a possible Fox TV Empire appearance!

Known for being a beast of the mic, Young Devyn actually started out as a singer, shares her mother and manager, Natasha Mason. Young Devyn was born humming to her own heartbeat,” “I know people say they started singing in church, but my little Devyn started humming her own tunes before she could even talk.” At the age of 2, Devyn became very sick and almost died; but even through the ordeal, the doctors and nurses couldn’t stop talking about the little girl in ICU who hummed songs all day and night. She made an impression on the medical staff and the little songs she sang helped the doctors to understand what she was feeling since she was so young. A survivor, Devyn made it through the medical scare and by pre-k was serenading the class. In fact, by the age of 5 she was asked to sing the school song at her “Step up Ceremony,” adding her ‘Lean On Me’ style twist to the school anthem leaving everyone amazed!

Born Devyn Ashli Millicent Tyson (birthday Dec. 28, 2001), Devyn was raised in the typical Trinidadian household and exposed to all facets of music but like most young people it was mostly hip-hop on her playlist: Lauryn Hill, Nicki Minaj, and Meek Mill are the artists who inspire her the most, musically and lyrically. Over time, Devyn’s musical talents evolved and expanded from singing traditional Soca/Caribbean music to rapping. The singer turned emcee started dabbling in hip-hop in 2016 posting 15sec Instagram videos gaining a new fan base. People were excited and wanted to hear more, so she started working on her mixtape posting “Freestyle Friday” videos on her Instagram page to rave reviews attracting industry influencers. Her freestyles went viral on FB, within 3 days the posts had 1 million views and by the end of the week was at 3 million.

The social shares of her freestyles made their way to MTV TRL host, Sway, and without even an official album, single, or music video, Young Devyn, was sitting on MTV TRL’s couch interviewing with Sway! Music industry veteran Duwayne “DaDa” Mills of The Alliance who signed Skip Marley and who has A&R’d albums for Monica, Ca$h Out, Stephen Marley, and Prince Royce, to name a few says of Devyn, “I haven’t been this excited about a hip hop artist since the first time I heard Big Pun, Lauryn Hill, or The Notorious B.I.G. Young Devyn is not just the highest quality young artist, she’s one of the highest quality artist period!”

Young Devyn looks forward to becoming the biggest act in the game after she graduates in June 2019. Until then watch as she unfurls her plans for musical domination, and don’t let the sweet face fool you, she’s ready! Check the video out above.