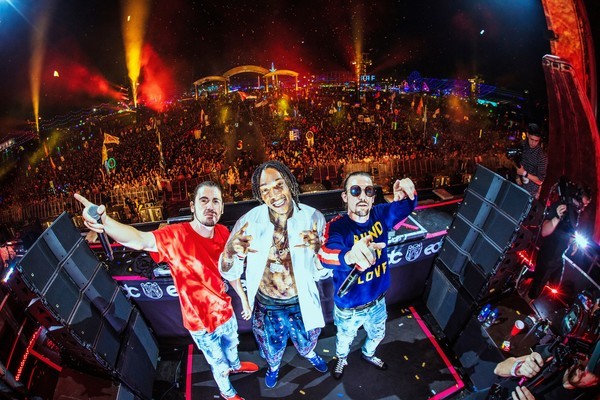 Belgium super stars Dimitri Vegas & Like Mike were joined on stage by rap icon Wiz Khalifa at EDC Las Vegas 2018 for the debut performance of their upcoming single “When I Grow Up”. The surprise guest joined them during their Friday night set at kineticFIELD, the largest stage at EDC Las Vegas. Wiz Khalifa is the latest addition to Dimitri Vegas & Like Mike’s growing list of A-List collaborations. EDC 2018 is the kickoff of the internationally acclaimed duo’s jammed packed summer schedule, including their second mind-blowing residency ‘Garden Of Madness’ at Ushuaïa Ibiza.

The Belgium-born Thivaios brothers have expanded globally as a top-draw live act after conquering Europe over the last decade. As recording artists, Dimitri Vegas & Like Mike have collaborated with the likes of Gucci Mane, Ne-Yo, Diplo, David Guetta, Kiiara, legendary composer Hans Zimmer (for an official Pirates of the Caribbean track), and most recently Steve Aoki and Abigail Breslin (Oscar-nominated actress) for their momentous collaboration “We Are Legend.” The brothers have scored two No. 1s on Billboard’s “Dance Club Songs” chart and were the first-ever duo to be named No. 1 DJs in the world by DJ Mag’s annual Top 100 Poll.

Check out the performance video below.