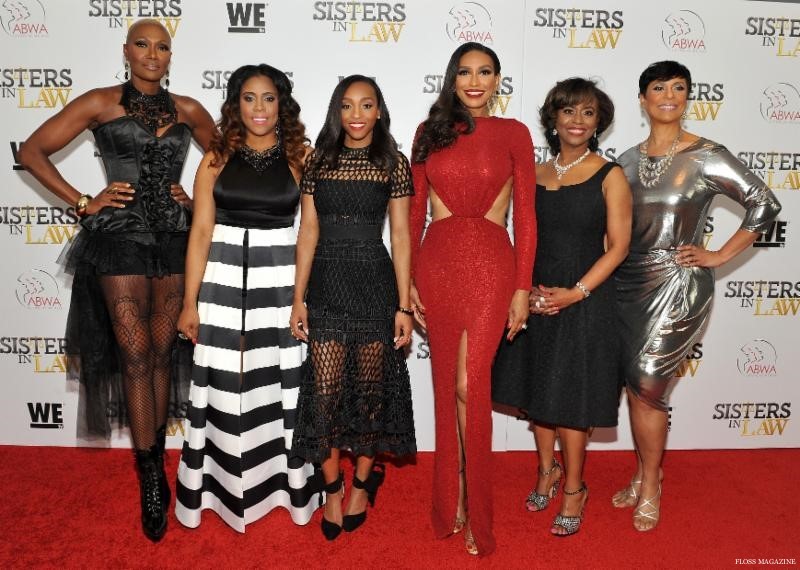 WeTV launched a new reality docu-series that documents the realness of the court system stronger than any other court show on tv.  The city is Dallas, TX and the cast of WeTV’s new show; Sister’s In Law expose the life, struggles, disagreements and sisterhood of six women who not only fight to uphold the law but also fight to get their point across.

The cast is comprised of three criminal lawyers, one public defender and two civil lawyers. However the plot doesn’t stop there, instead these ladies have created a bond with each other to help empower each other. They have a peculiar manner of empowerment that makes for “must see” tv.

Floss Magazine attended the sneak peak of the show before its debut and the event was well worth the trip.  WeTV rolled out the red carpet for all to get an opportunity to connect and interview these strong black women.  Strong not only pertains to their work ethic it also denotes their personalities.  So the question for all viewers; if everyone is strong in character and position how do they revere each other?

For me the star of the show was Ms. Jolanda Jones.  Standing over six feet tall rocking a blonde bald hairstyle you instantly felt she is the Nene of Dallas.  However when you watch the show you began to see that Ms. Jones is her own woman.  Unlike any other! Law is not her only passion.  Education, family and her community are qualities of her persona that make you support her.  Placing her flag in your hand and voice on blast saying; “Vote for Jolanda Jones!”

Another personality that you will love to hate (well hate might be a strong word) is Ms. Rhonda Wills.  They say don’t hate the player hate the game.  Well Ms. Wills plays the civil law game to the max!  She likes to call herself a dragon slayer.  However dragons are not the only thing she is slaying.  A few people who don’t share her sentiment are on her hit list.

A personal favorite was Ms. Monique Sparks.  Her honesty and propensity for justice combined with a twist of spirituality and compassion for the underdog makes you laugh at her sarcasm and wit while rooting for her position and stance as the next one to watch.

Vivian King is the G that led the way and doesn’t let anyone forget that their road was traveled by her first.  That position adds for some interesting drama but also makes you think about our need to respect the ones that made their mark to prove it can be done and wants to empower others.  Yet. is it empowerment or control?  Watch and let us know.

Juanita Jackson and Tiye Foley were not seen as much as the others, so although you know they do their thing you want to watch more episodes to watch how they develop in this legal reality that is real on every level.

On a scale of one to five Sisters In Law is a four who could easily be a five pending the crime.  Yes, it has the regular drama of the other shows but what makes this show a little different is the legal twist while watching their clients journey with the legal system and the role these six powerful women play to defend their client’s legal rights.

Sister’s In Law comes on every Thursday Night at 10:00pm ET/PT on WeTV.  For more information go to www.wetv.com