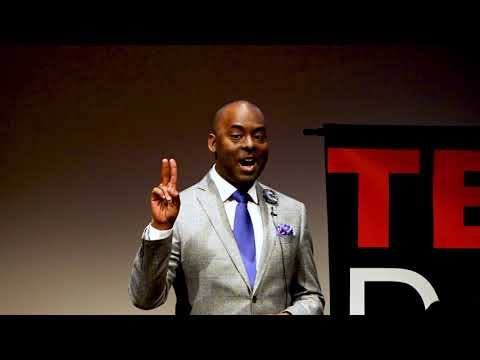 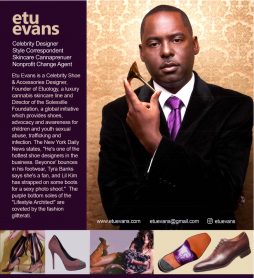 Referred to as the “Prince of Luxe,” Etu Evans has made a name for himself as a tastemaker to celebrities. He built his company, Etu Evans, LLC, into an international footwear, accessory, and interior design company that creates luxury items and one-of-a-kind footwear for the rich and famous. The company also designs under several private labels and operates an on-site luxury spa. 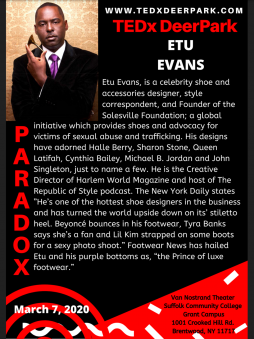 Once considered learning disabled, Evans took the cards he was dealt and turned them into a winning hand with determination and hard work. He has been honored by many organizations for his entrepreneurial and philanthropic work, including Crain’s Magazine, The National Urban League, Burger King, and Omega Psi Phi Fraternity. Having achieved his own success, Evans’ turned to philanthropy in order to help families and young people mired in unfortunate circumstances. To this end Evans has led the Solesville Foundation, a non-profit organization that shows others how to better their lives and provides shoes and aid to many.

Etu Evans was born on February 2, 1969, in Orangeburg, South Carolina, and spent much of his youth in the company of his aunts and cousins in Queens, New York. His early years were a challenge, as Evans had been labeled by the school system as learning disabled. Evans considered himself fortunate, however, because his family would not allow him to be limited by labels. His mother Rosa, an educator, inspired her son to excel both academically and creatively. She also showed Evans how to be responsible and earn the things he wanted. It paid off. At the age of six, Evans started his own flower-arranging business. By the time he was 13, Evans had expanded into interior design with considerable success. Although Rosa continued to worry about her son’s future, Evans continued to prove that he was well equipped to succeed. “I was unconventional and a progressive thinker from an early age,” Evans said in an interview with Contemporary Black Biography (CBB). “That’s why I speak at schools around the city to help kids and teachers understand how developing creativity can help kids face challenges in their lives. I know what I had to overcome and how it worked for me.”

In addition to his mother, Evans credited two others for his early confidence and skill: his stylish grandmother, Queen Ester, and Edson Murray, his mentor, whom he lovingly referred to as “Pops.” Queen Ester’s stylish shoes, jewelry, and hats filled Evans with a fascination for fashion. She also supplied the push he needed to work diligently at his studies and made sure that his shoes were always shined. Evans’ belief in himself and the power of prayer and hard work came from Pops, who worked as a master cobbler for Ralph Lauren.

All the encouragement, persistence, and prayer paid off. Evans graduated cum laude from South Carolina State University with a bachelor’s degree in social work in 1992 and earned a master’s degree with a 4.0 GPA in applied behavioral science from Columbia University in 1996. Evans also completed coursework in shoe design at the Parsons School of Design and footwear and accessories design at the Fashion Institute of Technology in New York during this time. Soon his degree in behavioral science would come in handy, as his understanding of the psychology of fashion increased. After college, his studies and talents took him to Europe, establishing and implementing behavioral programs for affluent clients in France and Italy.

An encounter on the streets of Paris gave early signs of his eventual success. One day Evans noticed he was being followed. He wasn’t sure why, but soon found out. His pursuer stopped him and complimented the stylishness of his outfit. This led to a meeting with a publicist at Gucci. By 1993 Evans had started his own millinery and jewelry company, called Etu Evans, LLC. He soon branched out into footwear and other accessories. He handily earned visits to his showroom by the likes of Beyoncé and Solange Knowles, Halle Berry, Erykah Badu, Danny Glover, Chris Tucker, Lil’ Kim, John Singleton, Kim Fields, and Steve Harvey. Etu Evans’ designs command attention alongside fashion’s top designers in publications like Elle, Essence, Ebony, Harper’s Bazaar, Savoy, Today’s Black Man and Woman, UK In Style, Spain Marie Claire, Time Out New York, Vibe, Honey, German Vogue, and Footwear News. Such high profile models as Tyra Banks, Iman, and Toukie Smith bought Etu Evans designs. His fashions appear in television and print ads for Martell Cognac, Burger King, Seagram’s, and Bloomingdale’s. Even Hollywood has embraced his designs, placing Evans’ shoes on par with celebrity favorites like Manolo Blahnik and Jimmy Choo. His creations have appeared in several movies, music videos, and television shows. Evan’s fancy footwear is a favorite of Star Jones of the popular television show The View, and has led to a private label contract with Payless Shoes. At the high-end, he designs for Ducati Shoes. Evans has several other private label contracts and will debut his own design line in 2006.

Evans described himself to CBB as a “fearless entrepreneur who always believed in himself.” Evans is tireless, with several on-going projects keeping his days filled with activities. It is a difficult feat for most, but not as much for someone who needs only two hours of sleep each night. Typically during his twenty-two waking hours, Evans can be found responding to his 200 e-mail messages and a flurry of calls, advising his staff, doing fittings and press releases, working with stylists in preparation for shoots, consulting, designing, and working on interior design books. He works on philanthropic efforts with his Solesville Foundation, founded in 1998 to help people get on their feet through a shoe repair apprenticeship program, shoe drives to collect thousands of shoes for the needy, and a youth AIDS walk. The foundation has helped thousands since its inception. In 2005 it collected and delivered thousands of shoes and truckloads of water to victims of Hurricane Katrina, and adopted several families in the process.

Watch Etu Evans, explains the power, process, politics and price of shoes. Please like share, and subscribe to the ETU EVANS YouTube channel
Evans related his advice to others to CBB: “I advise anyone who wants to succeed in the business to be on purpose and persevere. Be better than everyone else and be passionate about it. Prosperity will follow passion. Also realize that sometimes fashion is not a pretty business. People will try to get you to do drugs or sleep around. But you cannot compromise your integrity.”