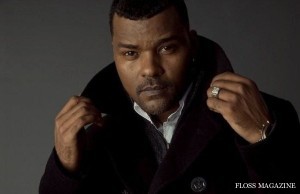 Gary Anthony Sturgis is a New Orleans born actor, writer, and director best-known for his portrayal of the villain in two of Tyler Perry’s biggest hit films, “Diary of A Mad Black Woman” (as Jamison Jackson) and “Daddy’s Little Girls” (as Joseph Woods). He also co-starred opposite Terrence Howard in “Pride”, as the charming yet sinister pimp/drug dealer Franklin Washington.

Gary is producing some of his own feature-length films under his production company, GEMFilmworks.

Sturgis spoke to the Von Boozier Twins about his career in Hollywood, Life lessons, and his upcoming production endeavors.

The biggest risk I have ever taken is?

GS: My biggest risk came two-fold. First risk was choosing the entertainment business as a career choice. Very risky for a minority in an ebb and flow industry. My second was the risks I take when performing roles. I dare to not do what is “safe” or what I call Actor 101; the easy route to the character. I tell young actors all the time, “Safe don’t get seen”. So in this business, it’s all about taking risks. Feast or famine and I like eating.

I’m glad that I never?

GS: I’m glad that I never took the easy or safe route to fast money. Selling drugs, arms or any other illegal activity comes to you easy in the hood, but I would walk past it, and everyone in New Orleans who knew me as a teen saw my ambition as I wouldn’t stray away from my creative goals for the lure of fast, tax-free money. A lot of people I know fell into that, but I always tried to make the right choices, even when many around me were doing the opposite.

The moment I knew I made it was when?

GS: I’m not sure if that moment has actually come yet. I can say, the moment I was TOLD I made it was when my mother Sarah Sturgis (Rest her soul) first saw me in my first film, THE BIG EASY that I had arrived, yet I was still living between her home and the dorm at UNO at the time, so I didn’t see it. I moved to Cali, started picking up more work in voiceover and voice promos. The money was amazing, but even with a six-figure salary I still didn’t feel I “arrived” as I was still not producing or starring in films. I just directed my first feature, “2016” a zombie apocalypse thriller which will be distributed by Lionsgate. I wrote it with Rick Jenkins and it stars K.D. Aubert, E. Roger Mitchell, Miguel Nunez, Jr. and Tiny Lister. Perhaps when that drops I will feel that moment. For now, I am merely grinding so if I arrived I didn’t stop working long enough to get the memo.

My greatest joy in life right now is?

GS: I am a simple man. My greatest joy is watching my sons Evan and Dane grow to young men. Evan is now 23 and works on my productions with me, and Dane is in his final year of high school. Little things like waking up in the morning do wonders for me.

I could never have predicted?

GS: I could have never predicted that my mother would be diagnosed with cancer, her biggest fear, and pass just 4 months later. She was the picture of health her entire life, so it came as a shock. Sadly, her last day alive was Mother’s Day, 2015 as she passed away the morning of May 11th, my wife Jennifer’s birthday. So that day now has to meanings. Never saw any of that coming.

GS: Life does not care about you or your daily issues. YOU must and you must be vigilant in making the right moves to secure your future. All of your wants, needs, and desires are all under the control of your own work ethic and how you manage your time. Waiting on a miracle takes a lot longer than motivating self closer to your dreams and goals. No one will be on your bandwagon if the wagon is sitting still.

The key to my happiness is?

GS: Striving daily to be a man of integrity and a man of my word. Where I come from, your word was usually all you had of value. So I pride myself on working diligently to keep my word. I draw my happiness from integrity as it helps me to surround myself with a better quality of people. Eliminating negative people and unproductive types from my inner circle. Projecting good and positive energy.

I get all my strength from?

GS: I get all my strength from the way my mother raised me. She never once told me what I could not do. I was always encouraged to pursue the arts, so my strength comes from a family of believers that the impossible can be possible. My mother Sarah and father Abraham (Yes, that is their real names) always lead me to believe I could do anything I set my mind to and back with action. They were correct. I said I would make it in entertainment from the hard streets of New Orleans. I am now in California for over 25 years with a resume that includes acting, directing, writing, producing and an extensive career in voiceover work. So my strength comes from a strong family foundation and support system. From this I often say, “I make the impossible, possible”. Post it all the time in social media.

Being in the public eye has taught me?

GS: Being in the public eye has taught me that those who are not in it sure have a lot of opinions. Wonder what they would say or do if the spotlight was turned on them and their business was suddenly open to the court of public opinion. For me, however, I tend to always say and do what I choose, not fitting the mold of a rehearsed talent who says all the right things politically to impress the masses. I tend to keep it real and be myself; which has worked to my advantage at times, as some prefer talent that is more relatable. I am not running for public office, so I don’t let how the public feels affect my movement. I learned early on in the entertainment game, negative publicity is still publicity, so use it to your advantage.

Acting for a living has been?

GS: Acting for a living has been a dream come true. Now I’ll venture more into producing and directing the many screenplays and television series I have penned over the years. You can see me on BET in Greg Carter’s film, LUCKY GIRL; or repeats of Chris Stokes’ film, WILL TO LOVE on TV One. I am currently in editing on my directorial debut in 2016, and shooting CainAbel a film I star in as well as HOWARD HIGH, a new musical offering from Chris Stokes. I appreciate all the love and support from my fans!