If Loving You Is Wrong Returns to OWN 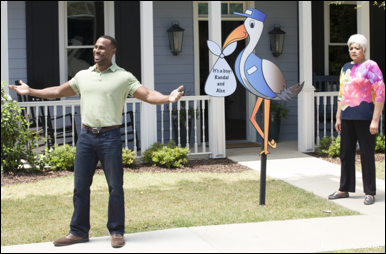 Tyler Perry‘s hit drama series If Loving You is Wrong will premiere on OWN with all-new episodes on Tuesday, March 15 at 10 p.m. ET/PT following the season finale of The Haves and the Have Nots (9-10 p.m. ET/PT).  The series will move to its regular timeslot at 9 p.m. ET/PT beginning Tuesday, March 22.

In the season premiere of If Loving You is Wrong, tensions are at an all time high amongst friends and neighbors, now turned foes.  Viewers’ suspicions were confirmed when it was revealed that Alex’s (Amanda Clayton) baby is the product of her affair with neighbor Randal (Eltony Williams).  The arrival of the baby ignites a cycle of revenge that will continue throughout the season — angry husband Brad (Aiden Turner) lashes out at Alex by initiating his own extramarital relationship with Randal’s wife Marcie (Heather Hemmens); and adulterous Randal fights with wife Marcie, while planning his own acts of revenge against Brad.  Elsewhere in the neighborhood, Esperanza (Zulay Henao) learns of ex Edward’s (Joel Rush) dealings with drug dealers as Edward sets into motion his plan to have killed fellow police officer, Pete (Chris Pipkin).

As the new season unfolds, Randal continues to exact his revenge; Alex endures the wrath of her racist father and the custody of her baby is questioned; and after keeping a deep secret for years, Lushion (Charles Malik Whitfield) makes a starting revelation to Natalie (April Parker Jones). Meanwhile, Kelly (Edwina Findley Dickerson) continues her search for love and unusual circumstances once again bring Edward and Julian (Octavio Pizano) face-to-face.