United Shades of America is a new CNN Original Series that follows comedian and political gadfly W. Kamau Bell as he explores different groups and subcultures throughout the country.  Along the way, he will ask questions, get into some awkward and at times unpredictable situations, and make people laugh. 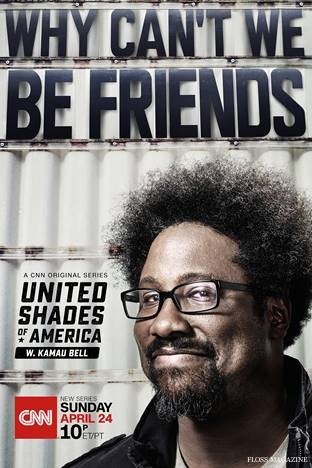 The eight-part docuseries strives to show the United States is not built upon just one, but many diverse and colorful definitions.  In season one, Bell visits with the KKK, prisoners at San Quentin,  Latinos in East LA, hipsters in Portland, spring breakers and retirees in Florida, people living off the grid, the Inuit of Alaska, and police officers in Camden, N.J.  United Shades of America, produced by All3Media, will premiere April 24th on CNN.

The Ku Klux Klan, a club known for hatred, violence and bigotry, was once a thriving organization in the United States.  Although there’s been a steady decline in members over the years, there are still people looking to spread a new message about white pride.  Kamau heads down south to visit with these men and women to see firsthand the new face of the KKK and discover if their hate-filled message remains the same.