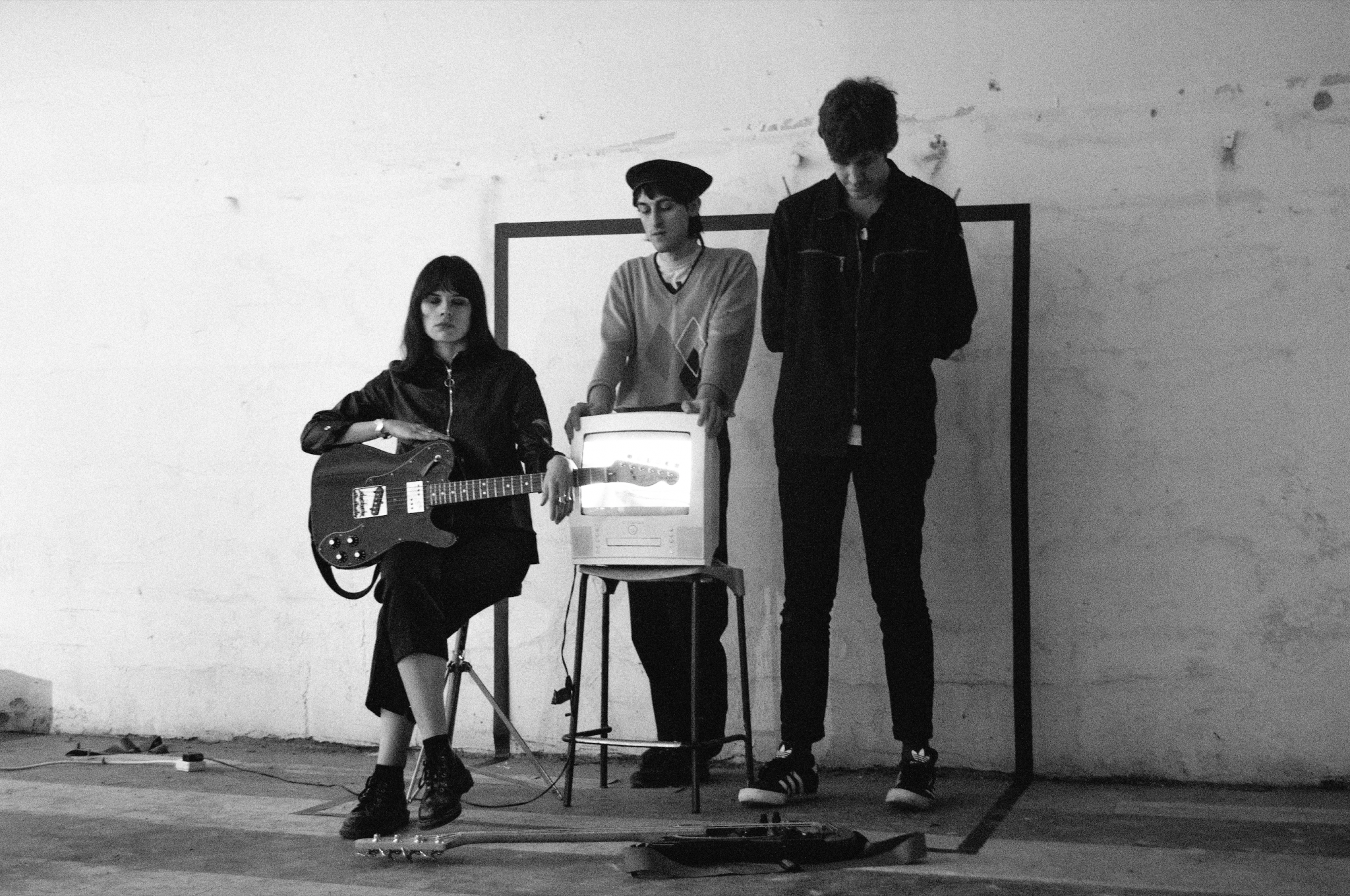 Today, Leeds-based post-punk outfit Drahla shared the second single from their upcoming Useless Coordinates LP due out May 3 on Captured Tracks.

“Go inwards and be bold.” This was Harmony Korine’s advice to aspiring creatives, during a Q&A at the British Film Institute back in early 2016. For the recently-formed Drahla , his words served as something of a directive, encouraging the trio to trust their own instincts, however far removed they might be from those of their peers. Three years on, the Leeds-formed band have defined their own vital subset of art-rock with Useless Coordinates, a debut album that’s as fearless as it is enthralling.

Speaking from her current base in south-east London with bassist Rob Riggs, singer/guitarist Luciel Brown recounts the record’s somewhat chaotic gestation. “Most of last year was spent touring, so we were squeezing writing and recording in from the beginning of 2018 until end of August.” In-between a headline tour, support slots with Ought and METZ, and multiple festival appearances – including at Meltdown at the request of The Cure’s Robert Smith – Brown, Riggs and Wakefield-based drummer Mike Ainsley managed 10 days in the studio in total.

It was the unsettled nature of the period that part-inspired the album’s title. “[Useless Coordinates] summarised all of our situations,” Brown explains. “We had all these shows coming up and we knew we needed to leave our jobs and change our living situations to make all this stuff happen. So we had all these fixed points and timelines, but at the same time we felt quite lost within all of that.”

Though they felt adrift in their personal lives, artistically Drahla thrived amongst confusion. Experimentation was integral to the creative process, with Brown and Riggs continuing to swap instruments as per their live shows, while collectively they were open to relinquishing traditional song structures in favour of adopting a more instinctive approach. Another integral development proved to be the involvement Chris Duffin of XAM Duo, who played saxophone on large swathes of the record and whose esoteric musical tastes were influential.

Via Duffin, they discovered the work of Japanese synth pioneers Mariah and saxophonist Yasuaki Shimizu. These cult figures figure amongst an eclectic array of musical touch points, from Glenn Miller and Swell Maps, to L.A.-band Behavior. As per their earliest releases, No Wave and post-punk remain integral to Drahla’s musical universe, evident in Brown’s brilliantly deadpan drawl, in the Gang Of Four-esque guitars on Gilded Cloud, and in Duffin’s skronking saxophone on React/Revolt, which draws parallels with the work of James Chance and the Contortions.

The set’s sharp angles, stark tones and claustrophobic textures are reflected in the album’s artwork. Designed by Brown and Riggs – as per all previous record sleeves and promotional videos – the minimalist, mixed media creation takes inspiration from Talking Heads and Gang Of Four album art, the work of American artist Cy Twombly, and the economical, regimented aesthetic of the Bauhaus movement. “Drahla came about off the back of needing an outlet for creative expression,” Brown explains. “So the whole aesthetic is hugely important. As important as the music.”

Whatever the medium, Brown’s interests lie in looking beyond the immediate to the abstract and indefinable. Her lyrics are developed from observations, notes and poems, and the fragmented imagery is spliced together to disorientating effect. On Gilded Cloud elegant snapshots from the golden age of Hollywood are juxtaposed with abrasive guitar textures, Pyramid Estate draws parallels between Ancient Egypt and the present day, and Serenity evokes the violent energy of a Francis Bacon painting. Beneath the abstraction are a diverse array of themes, including gender fluidity (Invisible Sex), city living (Primitive Rhythm) and artistic expression (Unwound).

The result is an uncompromising but deeply rewarding debut where the internal and external, cerebral and visceral coalesce to quite startling effect.