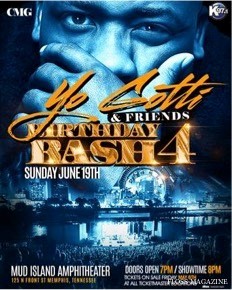 Amidst the viral buzz of his Billboard chart-topping smash single “Down in the DM”, EPIC Records/CMG recording artist, Yo Gotti, announces the return of his annual “Yo Gotti & Friends” Birthday Bash. In partnership with CMG Records and WHRK 97.1 (Memphis), Yo Gotti’s Birthday Bash will be celebrating it’s 4th year in the city of Memphis, Tennessee and is a highly anticipated concert series that features a plethora of his long time musical collaborating friends – previously boasting performing acts such as Nicki Minaj, Jeezy, Meek Mill, Nelly, August Alsina, Dej Loaf, Monica, Rich Homie Quan and more.

Each year the star-studded line up comes as a surprise to guests. This year “Yo Gotti & Friends” will take place on June 19th at the Mud Island Amphitheater in Memphis, Tennessee with doors opening at 7PM CST. Tickets go on sale Friday, May 6th and will be available at the Mud Island box office, ticketmaster.com and all Ticket Master locations.

Yo Gotti is fresh off the release of his 5th studio album, The Art of the Hustle, a 12-track project released on February 19th via Epic Records/CMG (Yo Gotti’s self owned recording label) that jumped to #1 on the Billboard Top R&B/Hip-Hop Albums charts. The Art of the Hustle features hit singles “Down In The DM” as well as “Law”, and offers collaborations from acts such as Lil Wayne, E-40, 2 Chainz, Timbaland, K.Michelle, Future and more. You can purchase The Art of the Hustle via iTunes here.