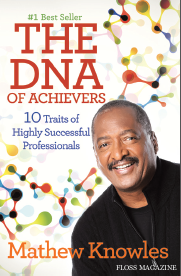 After decades of sales, star making, philanthropy, and career management, 2016 has been the year when Grammy Award-winning executive producer Mathew Knowles brings it all together. With the number #1 bestselling success of his book, The DNA of Achievers: 10 Traits of Highly Successful Professionals, Knowles has hit the road sharing his winning strategies for putting greatness into action. With his book selling rapidly, a similarly styled boot camp lecture tour is currently underway where he applies his acclaimed and award-winning approaches to a new generation of success seekers. The title of the book puts one in mind of the power of Knowles’ own successful DNA when considering his massive accomplishments in managing the careers of his offspring, Beyonce and Solange Knowles, along with the mega group Destiny’s Child and many others.

Meanwhile, for those curious about the methods of unraveling the DNA of the entrepreneurial mind his book and lectures hit all the right notes. Coming from someone who was once Xerox’s top sales executive leading over 250 marketing and sales seminars-even before he made an impact wrangling the careers of legendary music icons-it’s sound advice. Advice well-taken from someone whose leadership took his company, Music World Entertainment, to record sales exceeding $300 million.

He is building a new brand of achiever with his latest publication, which was an Amazon #1 best-seller even before its official release. Readers worldwide have been drawn by what the book unveils when showcasing the 10 traits of successful people (Passion, Work Ethics, Vision, Risk-Takers, Team Building, Talk-To-Do Ratio, Planning, Learning from Failure, Giving Back, and Thinking Outside the Box). Those taking to the pages to learn about the experiences of Mathew Knowles and other trailblazers can also get the experience live with his Entrepreneurship, The DNA of Achievers – Developing Your Skills & Talents Seminar now taking place nationwide.

While Knowles lights up minds with his electrifying talks, his company Music World Entertainment hasn’t slowed down. After the elevated achievements of Destiny’s Child, the company has continued to attract, train, and launch stellar talent into the industry. His latest foray into star making includes handing out mics to a new generation that bring us something that is (in the best hip-hop vernacular) fresh, in the form of  Blushhh Music, a harmonically blended hip-hop and R&B trio (est. 2013). They mix fiery rhymes and hooks reminiscent of the 90’ship-hop era-with a trendy twist brought to us by Sunnie, Tali, and Bunni Ray-three artists bringing the flow of original hip-hop, with the trending currents from today’s urban edge. Their new single, Old School Back launches from their debut album, Old School Hip Hop Past, Present, and Future.

Knowles is no stranger to the paths and perils of superstars. His methodic approach to artist development is being captured along the way in a reality TV format that takes us beyond their grooming as talent, but shows us their growth as well. Since we weren’t privy to Destiny Child’s rise, we are now given a chance to get the mogul’s techniques first hand-via books, the innovative seminar tours, and in watching the horizon’s to see what comes from a Midas touch.